Getting ready for move to new web site

To make the site more interactive it will soon migrate to http://www.slcteam.ning.com/
For the time being this site will continue as normal and I will slowly copy everything over to the new one.
Posted by blogger 8 on Saturday, January 30, 2010 1 comment:

Mark and I set off earlier than usual tonight intending to put some serious miles in.   I got as far as the airport where I had to turn back to get my gears sorted out as they were jumping all over the place.   Mark went on and was blown round the airport perimeter one way and then fought his way back.   As I relaxed in the bike shop (Andy was working on me bike) Mark reappeared with what he believed were 17 kms of road covered.   Unfortunately he had not reset his computer after taking it off his mountain bike and had therefore short changed himself as his alleged 17km were on 700c wheels not 26 inchers.   Anyhow after some mental maths we can confirm he made his second week of over 100 miles.
Posted by blogger 8 on Saturday, January 30, 2010 1 comment:

After Cavan's recent acquisition of his Giant and after watching him disappear off over the horizon the green eyed monster suddenly appeared and sent both Mark and I off in search of faster steeds. 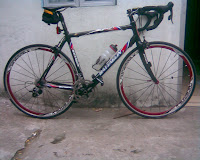 Despite severe trepidations I gently announced to my darling wife that I had bitten the bullet, put the horse out to grass, etc., etc., and struck a deal with Andy at Tung Chung Pro Riders on a shiny new bike. A Battaglin 3cime carbon.   Luckily and very gratefully I did not receive the castration I thought I was in for.   Hopefully and not coincidentally the slow demise of my elderly horse appeased her wrath somewhat.

Mark too has been busy with his wallet and has invested in a shiny silver coloured Cannondale CAAD9.  Stepping down, (quite literally) from his earlier Cannondale but most certainly raising the performance bar with the Dura Ace gears and more sensibly sized frame.

Now its time to get used to the new saddles and new fangled gear levers.
Posted by blogger 8 on Thursday, January 28, 2010 No comments:

Cavan, this is why I never said yes to doing the race!
Posted by blogger 8 on Thursday, January 28, 2010 No comments:

Well done to TJ for winning his race in the Criterium on Sunday.   Apparently he will donate some of his winnings to Keith who is saving hard for a new alarm clock. (Keith will understand).   But who is that talent scout in the red jacket sitting on the sidelines?

Off to the bike equivalent of the Vets

Recently my very faithful steed has been moaning and groaning more and more as it struggles to tote my rather bulky body along the roads.   I have lavished love and attention upon it by slowly changing out the old and the worn.   On its last trip to the bicycle vet I explained that when changing front rings the chain was either falling off or getting wedged between the two biggest rings, normally at the bottom of a hill too!    The vet patiently looked over the bike and gave a pretty expensive diagnosis.   Front cranks were ready for the knackers yard.   They were slowly bending out of true.  The good doctor produced a shiny new crank set and eagerly teased me to feel how light and smooth it all was.

As my own eyesight is somewhat blurred and my loyalty to my trusty steed so deep, I refused to accept the diagnosis preferring instead to believe and hope that it was a temporary glitch in my own gear change technique.  I did my own quack, (AKA cheaper) diagnosis and decided that maybe the bottom bracket was the issue, after all it had been creaking and groaning more and more.   So armed with the new HK$120 purchase I performed the necessary hip replacement (also known as a bottom bracket).   Yesterday the old steed pranced along!   The ride was smoother than ever and maybe even a little less effort was needed to trot along.   Pha, what does the vet know.   But no, oh no, at the bottom of the first hill I smugly flicked the gear changer to drop onto the lower ring and crunch.  Full lock down of chain!

I am sorry to have to report that last night the symptoms continued and I write this quietly in case the cranks can read.  It's time for them to go.   Trouble is a new set will be worth more that the complete bike.   What to do?   Bite the bullet and put the whole thing out of its misery or give the steed itself a glimmer of hope and keep investing in the hope that not much more can go wrong?  Call it a a knee replacement if you will?

I decided to seek a second opinion by quizzing a second vet.  Without even looking at the bike he told me flatly "front cranks will be bent"     Nightmare, how to break the news to her indoors?   All ideas gratefully received.
Posted by blogger 8 on Saturday, January 23, 2010 1 comment:

A few milestones have been achieved this week.   Firstly Cavan ventured over the hill from Mui Wo on his new Giant bike for the first time.   A very respectable 23 minutes climbing indeed.   Although he is not too impressed with Danny's comments that it is easier on a road bike than a mountain bike.   Suppose it is easier to believe if you weigh 54 kg?  Mark has cracked 1000 km of road travel since November this week.   Well done there too.   He and I also rattled off our first 100 mile week.   On Monday the 29km magical mystery tour of the airport, on Wednedsday 65 km and yesterday a further 73 km around Disney and Sunny Bay.
Posted by blogger 8 on Saturday, January 23, 2010 No comments:

Mark and I set off early tonight and managed to make the most of a very balmy evening. A 65km run at a very comfortable pace was achieved without too much effort. The head wind out of Tung Chung was unwelcome; as was the driving skills of the driver of the Discovery Bay bus registration LJ653 who did his utmost to force us off the road even though we were cycling in a line. Ah that also reminds me that on Monday night we were pulled up by PC plod for cycling two abreast.  He stopped us because we were apparently an obstruction to buses.   About four buses an hour use the road and two of them are travelling in the opposite direction.  Anyhow, daft old Sgt plod had pulled us up in the middle of the road and seemed happy to lecture us there on the perils of riding two a breast.  It never crossed his little mind to ask us to move to the layby next to him and out of harms way.  Before he stopped us we were cracking along but now stationary he rambled on about how much of an obstruction cyclists are and lo and behold a dirty great big bus or lorry or something came grinding to a halt behind us,  yep he could not get passed.  Wonder what would have happened if we had been hit.   An interesting police report to read.

I digress, by the time we had completed our fourth and last circuit of Sunny Bay we were caught up by Keith, Danny, Andy and the Koon Wah crew who had been training for the forthcoming road race by cycling behind a pacer motorbike at a less than leisurely 40km.   Apparently they managed to stay the distance from the DB tunnel turn off, up to the end of the Tung Chung service road.  Blimey.

Although we were both beginning to flag by the time we made the fourth ascent up from Sunny Bay we decided we should not be out done and had better make an effort to push harder for the final run back into Tung Chung.   So taking full advantage of a breezy but now following wind and outr less than slipsstreamed  body shapes we upped the pace and found ourselves trundling along in the high 30s and at times low 40s. A quick cup of instant coffee at the 7/11 and then back to the bike shop and home. Will sleep well tonight!

It takes a while to load but its worth the wait 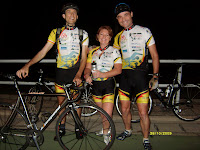 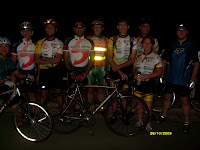 Danny, Petra, Keith and others line up for a mug shot before heading off to Sunny Bay and Disney etc.

Learning our way around the airport perimeters

Hmmm.   Obviously we need to do this route a few more times with riders who know the route better than we do.   Starting out very confidently Mark, Petra (back from the depths of Australia), Matthew and me pedalled out to the airport perimeters.   The ride out was balmy, relaxed and views stunning.   The return was windier than expected and longer, much longer, thanks in part to my complete inability to work out where we had been.   Any how 30 km or so later we were safely back at the bike shop.

The Energetic triathlon Shatin has organised a duathlon, (run / bike / run) on 24 Jan.   The timing of their race appears to have attracted the attention of Andy from the Tung Chung Riders Pro bike shop and the equally quick but perhaps not quite so prominent Sun from Mui Wo.   I am sure they will do well.   Meanwhile the remainder of the Koon Wah Construction clan, both male and female plus TJ and others are continuing to train for the HKCU criterium around Yat Tung.   I know that the Lantau clan will put in a good showing (despite Cavan's withdrawal) and hope to post photos of both events soon.   Although Mark appears to be nursing some damage or strain to his hamstring he has continued to keep stacking up his miles and fitness.   So much so that he and I continue to plot and scheme about upgrading our bikes.

HK Traffic Code and I quote, "You must drive with care and attention and with reasonable consideration for other road users....."